SMS Marketing: Past, Present, and Future 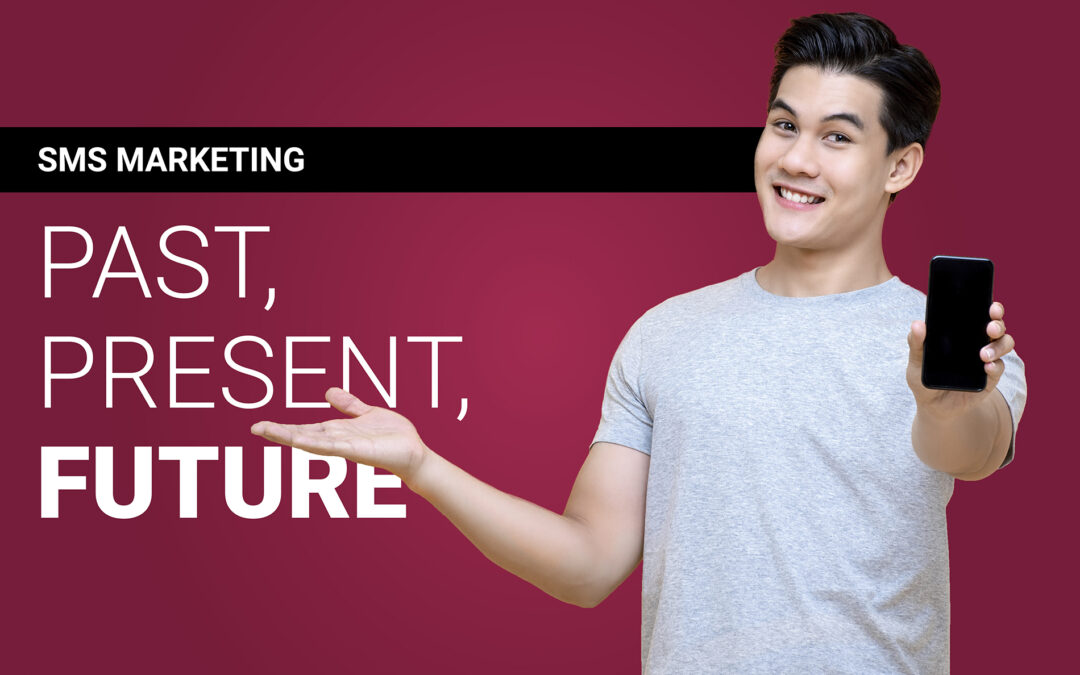 Everyone texts nowadays– even your grandma. But that wasn’t always the case. It’s hard to believe that not too long ago (in the grand scheme of things), text messaging didn’t exist. And for a while, even if it did exist, it was cumbersome and expensive– remember the T9 days of punching a number multiple times to choose a letter and then paying through the nose per text sent?

By understanding the full context of how text messaging was born, and how it has evolved as a medium, you can get a new perspective on your SMS campaigns and where they may be headed. In this article, we’re going to talk about SMS marketing’s past, present, and future.

The Birth of Text Messaging

Have you sent a text lately? Of course, you have– it’s revolutionized the way we communicate. In light of how valuable text messaging has become, let’s take a moment to thank an unsung hero: Neil Papworth.

One fateful day in December 1992, Papworth sent the world’s first text message. He was 22 at the time, and working as a software developer. Papworth used his computer to send a message to a friend’s phone across town: “Merry Christmas”, it read. His friend, Richard Jarvis, was at a party when he received the message and was blown away. And it was with that single message that the concept of text messaging was born.

It wasn’t long after that Papworth began to actively develop Short Messaging Service (SMS) for a client named Vodafone. The goal was to speed up communications between the secretaries and other employees like technicians and directors so that they could eliminate interruptive phone calls for short, necessary updates. It wasn’t long after that cellular networks began to adopt the technology and allow users to send messages to other users who had the same carrier. Text messaging evolved from there to be the behemoth of a communication tool that it is today.

How Text Messaging Shaped Our Culture

In 1997, Nokia was the first company to bring a cell phone to the market that had a full QWERTY keyboard– but even though the 9000i had all of those keys, SMS messages still had a character limit of 160. It was this limitation that shaped our culture forever.

As text messaging become more accessible and widespread, people began to invent a shorthand language to save time, money, and space within texts. Often now referred to as ‘txt spk’, the goal was to abbreviate things to their shortest possible state, but still allow them to be understood. It was from this shorthand that the cultural mainstay abbreviations such as ROFL (rolling on the floor laughing), and LOL (laughing out loud) were born.

It’s also said that emoticons (the precursor to formal ‘emojis’) were born in the landscape of SMS messaging as people attempt to abbreviate things even more while adding a personal touch. Hence a colon and a parenthesis were put next to each other, giving us the first smiley face. 🙂

These elements and many others born from text messaging have remained staples of our culture and have continued to evolve and grow, now more widespread than ever.

The Present Moment of Text Messaging

Remember that enormous 250 billion number we just mentioned that was sent over the span of years? Well now, 23 billion texts are sent every day. We all know from experience that text messaging is one of the most efficient, quickest, and important forms of communication we have at our fingertips.

And now more than ever, people understand that texting isn’t just for communicating with friends and family. In fact, people expect and prefer that businesses send them updates and other communications via text message. From delivery notifications to reminders, to flash sales, text messaging is a part of the lives of consumers, and that isn’t going to change any time soon.

The COVD-19 pandemic only accelerated things as purchases were made from phones more than ever, and food and grocery delivery and curbside pickup exploded in a way that no one could have planned for.

Why You Need to Be SMS Marketing Right Now

Text message marketing is one of the most– if not the most — effective channels you can employ in the current landscape of digital marketing. Here are just a few stats that you need to keep in mind that prove why you need to include SMS campaigns in your marketing mix or you’ll be left behind.

The Future of Creative SMS Marketing

More and more people every day are actively using mobile phones to handle every facet of their lives. Text messaging is a way to reach people on a device that they have with them all the time, and that they give their attention to an average of 160 times a day.

Here are some things that you need to keep in mind about the future of text message marketing.

More Businesses Will Be Texting

When you look at the digital marketing landscape, it’s more crowded than ever. Ads are more expensive, and the signal-to-noise ratio is higher than ever. One of the only marketing channels that can cut through the crowded landscape is text messaging– but time is short. More businesses every day are beginning to text, and the market is becoming more and more saturated with each passing week.

As more and more businesses begin text messaging, you have to set yourself apart. When you send a personalized, targeted message to a customer, you’re going to get better results than if you blast out generic messages. Consider sending customers products that are based on past purchases, and use the customer’s name when possible. This is the best way to be at the forefront of trends and stay ahead of the curve.

Conversational Commerce is a Trend You Can’t Ignore

Conversational commerce is one of the most powerful and important things happening in the world of chat and text. People are making purchases based on the conversations that they’re having with vendors and online stores. They don’t want to guess what the best choice is, they want to know based on conversation. When you reply to customer questions quickly through text channels it reduces friction, helps to overcome objections, and increases sales.

Key In On Customer Support Through Text

When a customer needs help, they want it right away. The most common methods of getting customer service are through phone calls and emails, and frankly, those can take a while to get any sort of effective answer. We are seeing a surge of frontrunner companies that are bringing their support to their text channel. They’re seeing higher retention rates, a higher quantity of great reviews, and increased customer loyalty.

Text-Calibur is The Weapon You Need

The landscape of SMS marketing is changing at a rapid pace, but you can keep up. Text-Calibur is the weapon you need to execute all of your text message marketing with excellence.

Text-Calibur is the industry-leading text messaging service that will let you engage with your clients seamlessly to send them SMS marketing campaigns that convert. You’ll have easy-to-use tools at your fingertips that are powerful and get results.